The trial of Simon Walsh at Kingston Crown Court

This report is dependent on the live-tweeting from inside the courtroom by solicitor Myles Jackman (who represents the defendant) and academic sex-researcher Alex Dymock. Follow them for further updates.

Simon Walsh, barrister and alderman of the City of London, was arrested at work in April last year. It is not clear why. As a result of the arrest he was sacked from his position on the London Fire Authority. The arrest has also inevitably had serious repercussions for his legal career. Although Walsh admitted to the police that he had an interest in "BDSM, coprophilia and urethral sounding" (of which more anon), he doesn't seem to have been unusually obsessed by violent pornography. According to Myles Jackman, none was found on either his work or home computers. But he had been sent something by email. And that was enough for the Crown Prosecution Service to think it worthwhile putting him on trial at Kingston Crown Court.

Walsh is being charged with several counts of possessing extreme pornography under the notorious s63 of the 2008 Criminal Justice and Immigration Act. This makes it illegal to possess (and looking at something on a website technically counts as possession) any pornographic image depicting animals, dead bodies or "an act which results, or is likely to result, in serious injury to a person's anus, breasts or genitals." I've written about this illiberal piece of legislation on several previous occasions.

The trial began yesterday. After the prosecution barrister outlined the charges, the first witness was called. DS Callahan described how the police had accessed the defendant's hotmail account - the password having been freely given to them - and discovered an email which contained nine attachments, including images and a story about a young soldier being hanged. The email subject line read "pics of me, cbt etc" (cbt="cock and ball torture"; I had to look it up. In fact I had to look up quite a lot of stuff while preparing this report. Thank me later.) So the man sending the pictures was presumably the one depicted in the images. 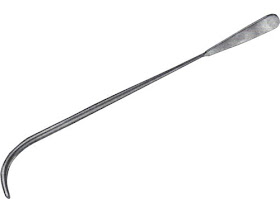 Today's main witness was a urological surgeon, Mr Paul Hegarty, who appeared for the prosecution. He had brought a box of urethral sounds with him (there are several varieties and widths), and discussed both their medical use and the health risks that they might pose in the wrong hands. They were mainly used, he said, to extract foreign objects from a patient's bladder. Among those he had come across in his career were a biro, a thermometer, some industrial plastics, a piece of wood and a catheter. He was aware that urethral sounds were also used for erotic purposes, a practice that he maintained was potentially dangerous, carrying risks of infection or injury if the sounds are not sterile or held properly. He admitted, however, that serious complications were rare. This might turn out to be an important admission. So might his statement that patients were sometimes taught to use a urethral sound on themselves, which implies that it is not a procedure that requires medical expertise to be performed safely.

Hegarty maintained that the use of a urethral sound would be especially dangerous in conjunction with a constrictive device such as a penis ring, which featured in at least one of the images under consideration. But he also said that he had never seen the use of sounds and constriction device in combination before. Indeed, he had never never (to his knowledge) seen a patient who had an injury caused by the use of a urethral sound for sexual gratification, though he had caused minor injuries himself by accident. He did not agree with a medical report produced by the defence which suggested injuries sustained in erotic play using urethral sounds was rare; he disagreed with the methodology used. He did however state that the image being prosecuted showed clear signs of lubrication having been used, which would reduce the risk of injury or infection.

an exhilarating way to gently stretch the urethra, and for men, stimulate the prostate from within. Both men and women will enjoy the scintillating stimulation when you add vibration into the mix. We carry vibrating sounds or you can add vibrations with the help of a tuning fork set.

It's worth noting that, when investing in a set of urethral sounds customers are invited to buy antiseptic wipes, lubrication and other hygienic accessories. Other sites go into more detail about the practice, giving advice on safety as well as on techniques to ensure maximum pleasure, while a number of dominatrices offer it as part of their repertoire. I won't link to any of these sites, which may contain potentially illegal images. But they're not difficult to find should you want to explore this fascinating topic any further.

This is the kind of case, as illiberal as it is absurd, that campaigners against the law warned about more than four years ago while it was being passed. They were told that their fears were being exaggerated, that the law posed no threat to practitioners of consensual BDSM and that it would only be used in exceptional cases. This has turned out to be untrue. People with no unconventional sexual tastes have been prosecuted for receiving video-clips unsolicited on their mobile phones, and in this case, it appears, police have gone into a man's email account on a fishing expedition, turning up very meagre results but proceeded with a prosecution anyway. In its vindictiveness, and in its targeting for no apparently good reason of a prominent gay man, it recalls the prosecution in 1954 of Lord Montagu of Beaulieu, Peter Wildblood and Michael Pitt-Rivers, who were convicted of consensual homosexual offences in what most of us must have supposed was a forgotten dark age.

For the CPS, this case represents further evidence of cluelessness and disproportionality after last week's dismissal of the charges against Paul Chambers in the Twitter Joke Trial. It shows, once again, that the CPS guidelines are woefully inadequate when it comes to assessing the public interest. In the year 2012, a man is on trial because someone sent him, by email, pictures of himself engaging in legal sexual activities. Words fail.

In today's short session, DS Callahan was recalled to the witness box. The main point of contention involved the image that the CPS claim is indecent, and whether or not the defendant had even seen it. It was contained in an attachment to an email that had remained on Walsh's hotmail inbox for three years. DS Callahan admitted that the police were unable to prove that the attachment had ever been opened. The image was held on a server located outside the UK. This in itself raises questions of the meaning of "possession" - a hotmail account, after all, does not technically belong to the account holder but to Microsoft, who merely give permission to the holder to access it using a password. The CPS are unable in any case to produce any clear evidence that the attachment was opened: how this is meant to prove possession "beyond reasonable doubt" is profoundly mysterious.